M&S, which owns three trademarks in relation to Colin in the name and packaging, believes it has acquired and retains an enhanced distinctive character and reputation, since launching 30 years ago. In support of their allegations, M&S have claimed that Aldi’s cheaper version of the chocolate cake is so similar to their own that it leads consumers to believe they are of the same high standard and “rides on the coat-tails” of M&S’s reputation of quality.

The court will need to decide whether Aldi is seeking to gain a commercial benefit by bringing Cuthbert to market and whether he is masquerading as Colin at children’s birthday parties around the country (both cakes are pictured below (image from the BBC), Colin on the left and Cuthbert on the right). 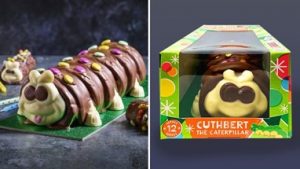 As a result, M&S, or ’Marks & Snitches’ as Aldi called them in one of a series of amusing public Tweets, believes that Aldi are infringing their trademark. It wants Aldi to remove the Cuthbert product from its shelves and never sell anything similar in the future.

While the appearance of the cakes themselves are certainly similar, in order to succeed, M&S must demonstrate that Colin is so well known that it has acquired its own goodwill, thereby leading consumers to recognise it as M&S’ product, even without the Colin name. The question is then whether consumer confusion results from the similarities between the two products.

Interestingly, various other supermarkets now also sell similar caterpillar cakes, including Tesco’s Curly, Sainsbury’s Wiggles, Waitrose’s Cecil and Asda’s Clyde and it is possible this will undermine M&S’s claim. It may be found that the average consumer is aware that caterpillar cakes originate from different retailers and not just M&S. It is as yet unclear why M&S have decided to sue Aldi rather than the other retail chains. It may perhaps be that Cuthbert is closer in appearance than the other chocolate treats.

Seemingly unperturbed, Aldi has since claimed on social media it will bring out a limited edition Cuthbert with profits going to cancer charities, Macmillan and Teenage Cancer Trust. In a Tweet, Aldi stated, “raise money for charity, not lawyers” and included the hashtag “#caterpillarsforcancer”. It remains to be seen whether this will be enough to persuade M&S to discontinue their claim. With upwards of £15million worth of sales from Colin though, we guess that M&S will do everything they can to protect him.

This will certainly be an interesting case to follow (if it doesn’t settle) – as Aldi tweeted in response to the claim, “this is not just any court case, this is… #FreeCuthbert”.

For advice and support on protecting and maintaining your intellectual property rights, please get in touch.