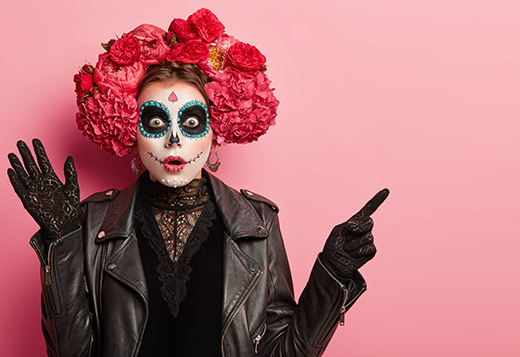 The Zocalo in Mexico City is the largest plaza in Latin America. It can hold up to nearly 100,000 people. It was used for the spectacular opening sequence in the Bond movie Spectre.

I was travelling by car to visit the Zocalo last week (it can’t be all work on a business trip) and was keen to find out how the filming of the scene had gone. My Mexican colleague, Monica, was effusive in her praise for the filming. The Mexicans had embraced it whole heartedly. Unsurprisingly, they were queueing round the block to be extras and to be able to wear the Day of the Dead costumes and face paint.

I asked Monica how many centuries the Day of the Day festival has gone on for in the Zocalo and was very surprised at her reply. She said that the first time it took place was for the Spectre movie. That was in 2015.

The Mexicans were so pleased with the result, the Spectre movie, that they decided to inaugurate a Day of the Dead festival around All Souls Day. So now it happens every year. In 2019 it falls on 2 November.

Just think that one scene in one Bond movie has managed to achieve that for one of the biggest cities in the world.

Even 3 weeks before this, I witnessed Day of the Dead characters walking in and around the Zocalo, glad to have their photos taken with passing tourists. The face paints are amazing.

I guess it is like the Rio Carnival in February which celebrates the start of the 40 days leading up to Easter. And it provides so much more fun than Halloween.

Day of the Dead in Mexico City: 10 Best Things to Do + Where to Go